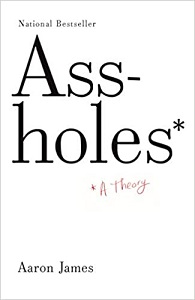 This month is a documentary about a book, rather than the book itself. Both are called Assholes: A Theory. The book is by Aaron James; the documentary is by directory John Walker

The CBC writes, “With philistine politics and toxic tweets trashing civilization as we know it, the time has come for Assholes: A Theory.”

If you are a member, you will also receive the Zoom link in the week of the meeting. If you are a new member, contact Julie to get on the emai list. We look forward to welcoming new members. 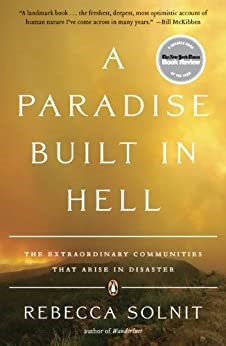 Why is it that in the aftermath of a disaster – whether manmade or natural – people suddenly become altruistic, resourceful, and brave? What makes the newfound communities and purpose many find in the ruins and crises after disaster so joyous? And what does this joy reveal about ordinarily unmet social desires and possibilities?

In A Paradise Built in Hell, award-winning author Rebecca Solnit explores these phenomena, looking at major calamities from the 1906 earthquake in San Francisco through the 1917 explosion that tore up Halifax, Nova Scotia, the 1985 Mexico City earthquake, 9/11, and Hurricane Katrina in New Orleans. She examines how disaster throws people into a temporary utopia of changed states of mind and social possibilities, as well as looking at the cost of the widespread myths and rarer real cases of social deterioration during crisis. This is a timely and important book from an acclaimed author whose work consistently locates unseen patterns and meanings in broad cultural histories.

The May 14 meeting is here, from 2pm-4pm: https://tinyurl.com/UFPbookclub1

The May 28 meeting is here, from 2pm-4pm: https://tinyurl.com/UFPbookclub2

If you are a member, you will also receive the Zoom link in the week of the meeting. If you are a new member, contact Julie to get on the emai list. We look forward to welcoming new members. 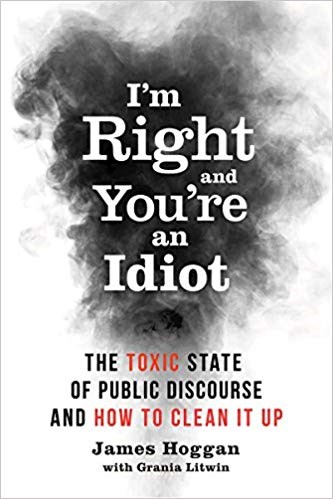 The most pressing environmental problem we face today is pollution in the public square, where a smog of adversarial rhetoric, propaganda and polarization stifles discussion and debate, creating resistance to change and thwarting our ability to solve our collective problems.

In “I’m Right and You’re an Idiot”, author and David Suzuki Foundation chair James Hoggan grapples with this critical issue, conducting interviews with outstanding thinkers from the Himalaya to the House of Lords. Drawing on the wisdom of such notables as Thich Nhat Hanh, Noam Chomsky, and the Dalai Lama, his comprehensive analysis explores:

– How trust is undermined and misinformation thrives in today’s public dialogue
– Why facts alone fail — the manipulation of language and the silencing of dissent
– The importance of reframing our arguments with empathy and values to create compelling narratives and spur action.

Focusing on proven techniques to foster more powerful and effective communication, I’m Right and You’re an Idiot will appeal to readers looking for both deep insights and practical advice.

Barbara Herring and Joan Higginson, two of our members, read and recommend this book. Should be a good discussion. 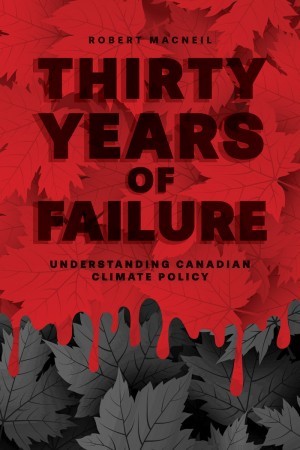 Thirty years ago, Canada was a climate leader, designing policy to curb rising emissions and
demanding the same of other countries. But in the intervening decades, Canada has become more of a climate villain, rejecting global attempts to slow climate change and ignoring ever-increasing emissions at home.

How did Canada go from climate leader to climate villain?

In Thirty Years of Failure, Robert MacNeil examines Canada’s changing climate policy in detail and argues that the failure of this policy is due to a perfect storm of interrelated and mutually reinforcing cultural, political and economic factors — all of which have made a functional and effective national climate strategy impossible.

But as MacNeil reveals, the factors preventing a sensible, sustainable climate policy in Canada offer activists some strategies to strengthen Canada’s response.

Barbara Herring, one of our members, read this book and found it highly readable, engaging and informative, It provided helpful information specific to Canada’s climate response. 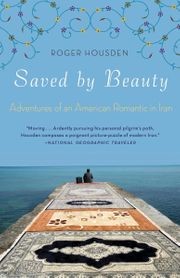 When Roger Housden decided to travel to Iran and finally see the subject of his youthful fascination, he was in his sixties. By then, he thought he had seen the world. He was wrong.

It was a quest that changed him forever. In Iran, Housden met with artists, writers, film makers and religious scholars who embody the long Iranian tradition of humanism, and shared with him their belief in scholarship and artistry. From the bustle of modern Tehran to the paradise gardens of Shiraz to the spectacular mosques and ancient palaces of Isfahan, Housden met Iranians who were warm, welcoming, generous, intellectually curious, and altogether alive with their love for one another, and for the faith and tradition that holds them together.

Saved by Beauty weaves a richly textured story of many threads. It is a deeply poetic and perceptive appreciation of a culture that has endured for over three thousand years, while it also portrays the creative and spiritual cultures within contemporary Iran. While there, Roger Housden was brought face to face with the reality that beauty and truth, deceit and violence, are inextricably mingled in the affairs of human life, and was forever altered by it.

Click the button below to support the work of the Fellowship via Canada Helps.

Join for social time at 10am. The service begins at 10:30am:
https://tinyurl.com/UFPsundayservice

Reflections on the losses and transitions of our lives that bring us grief, as well as the gratitude that comes with growth and new beginnings.