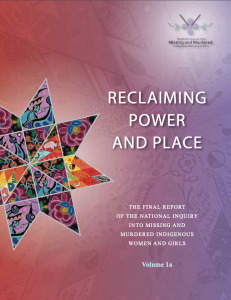 The Canadian Unitarian Council acknowledges the systemic and ongoing nature of colonization of Indigenous peoples, land, and resources on this land. We are becoming more aware of the many ways in which colonization unjustly privileges settlers at the expense of Indigenous peoples. We acknowledge the findings and calls to justice of the Missing and Murdered Indigenous Women (MMIW) Final Report, and that these require immediate attention.

As Unitarian Universalists, we have also taken a stand for gender equality and the rights of LGBTQ+ peoples – values that intersect with the National Inquiry into Missing and Murdered Indigenous Women and Girls’ (MMIW) Calls for Justice.

The term ‘genocide’ is used in this report (read the reflection on ‘genocide’ in the Executive Summary) to describe our collective actions towards Indigenous peoples. As challenging as it is to acknowledge this term, in particular towards Indigenous women and girls, we accept this assessment based on the 1948 United Nations Convention on the Prevention and Punishment of the Crime of Genocide. We are mindful that resistance to the use of ‘genocide’ may be linked to beliefs about our identity as a nation and denial of the facts of our shared history. It may also be linked to a mindset that emphasizes individual intention/action while minimizing the role of systemic influences in racism and privilege.

Chief Commissioner Marion Buller has stated that an “absolute paradigm shift is required to dismantle colonialism in Canadian society”. We recognize that the paradigm shift asked of settlers may cause us to feel uncomfortable and vulnerable. While we may not have individually constructed the racist system that is in place, we are each complicit in sustaining it until we take steps to change it. Therefore, we take ownership for our part in a system that has resulted in Indigenous women and girls:

As Unitarian Universalists we are committed to studying this document with the intent of taking action on the 231 Calls to Justice starting with item 15.3, which urges us to read the final report, take other steps to educate ourselves, and call on our governments to take action.

Resources for reading and action: