Unitarians and Universalists have always been heretics, not because we desire to be rebellious, but because we want to choose our faith. (“Heresy” in Greek means “choice.”)

During the first three centuries of the Christian church, believers could choose from a variety of tenets about Jesus. Among these was a belief that Jesus was an entity sent by God on a divine mission, that he was one with God, from which the word “Unitarian” arose. Another choice was the belief in universal salvation: that no person would be condemned by God to eternal damnation. Thus, a Universalist believed that all people will be saved. 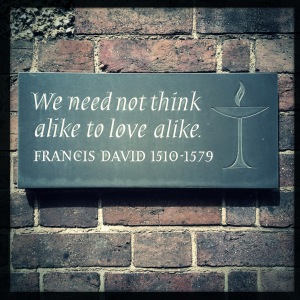 When the Protestant Reformation took hold, the first edict of religious toleration in history was declared in the remote mountains of Transylvania in Eastern Europe in 1568 by the first and only Unitarian king, John Sigismund. Sigismund’s court preacher, Frances David, had converted to Unitarianism because he could find no biblical basis for the doctrine of the Trinity. Arguing that people should be allowed to choose among faiths, he is purported to have said, “We need not think alike to love alike.”

Over the next several hundred years, Unitarianism grew throughout Eastern Europe, spreading westward into the British Isles.

Unitarianism had a direct influence in Canada through immigration. Contrary to the experience elsewhere, Unitarian organization here began with the arrival of individuals who brought their Unitarian views with them. A group of such individuals succeeded in establishing the first congregation in Montreal in 1842. During the following years, a few other congregations were founded, and each congregation affiliated separately with British and American associations.

Universalism developed on this continent in many areas. A small number of itinerant preachers began to disbelieve the strict Calvinist doctrines of eternal punishment. They discovered from their biblical studies a new revelation, that of God’s loving redemption of all. Universalism was a more evangelical faith than Unitarianism, and after officially organizing in 1793 the Universalists spread their faith across the eastern United States and Canada. From its beginnings, Universalism challenged its members to reach out and embrace people whom society often marginalized.

With growth in numbers and easier communications, pressure for a national association resulted in the establishment of the Canadian Unitarian Council / Conseil unitarien du Canada (CUC) in 1961. Limited at first in resources and scale of activities, it has progressively increased its operations until today it is responsible for all work beyond a local level, with the exception of one or two areas where it makes more sense to work through the American organization, the Unitarian Universalist Association.

Take a break from Reframe documentaries and link in instead to hear Christian Harvey, the equally inspiring anti-poverty activist speak about its work to address the housing crisis of our city’s marginalized neighbours.

Covenanting through Transition is a national worship service that asks us “How do we stay in covenant through all of this in our communities? How do we stay in it in a good way when it is hard and people aren’t always their best selves or are disappointed?”

Many of us use the language of “beloved community” with which to speak of our covenanting fellowship and its highest aspirations. But what’s love got to do with it?

Click the button below to support the work of the Fellowship via Canada Helps.